Some Days ago Staff Selection Commission invites application for vacant posts of LDC/JSA, Postal/Sorting Assistant, DEO. Interested candidates filled their online application. All the detail about the recruitment of SSC CHSL Vacancy in the link given below in this page. 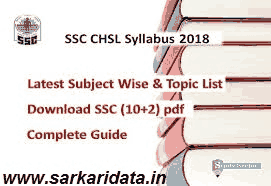 SSC Paper-II is conducting subjective and aspirants have to write an essay. The essay must have been 200-250 words. And time duration for the written test is 1 hour (120 minutes). And 20 minutes extra for  VH/OH afflicted by Cerebral Palsy, OH with the deformity in writing. This written test is held for checking the writing skill of the aspirants.

There will be some important instructions to aspirants is given. Read the instructions carefully and must keep in mind.

There will be a Typing Test is held in paper-III. Aspirants must have minimum data entry speed of 8000 key per hour in the computer. And aspirants also have enter 2000 strokes in English during 15 minutes.